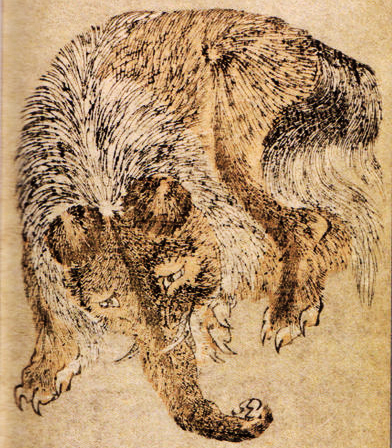 Baku are Japanese supernatural beings that devour dreams and nightmares. They have a long history in Japanese folklore and art, and more recently have appeared in Japanese anime and manga.

The traditional Japanese nightmare-devouring baku originates in Chinese folklore and was familiar in Japan as early as the 14th-15th century. Baku are almost always seen as beneficial, and pictures of the creatures are often placed in Japanese bedrooms to help ward off bad dreams (in modern times, baku toys and plush dolls may be used instead). In addition, people sometimes write the Chinese character for "baku" (獏) on pillowcases. In Edo-era, pillows with a baku depiction was sold widely.

An early 17th century Japanese manuscript, the Sankai Ibutsu, describes the baku as a Chinese mythical chimera with an elephant’s trunk, rhinoceros eyes, an ox tail, and tiger paws, which in belief protected against pestilence and evil, although eating nightmares was not included among its abilities. However, in a 1791 Japanese wood-block illustration, a specifically dream-destroying baku is depicted with an elephant’s head, tusks, and trunk, with horns and tiger’s claws. The elephant’s head, trunk, and tusks are characteristic of baku portrayed in classical era Japanese wood-block prints and in shrine, temple, and carvings.

Baku are generally benign creatures who aid human beings by eating nightmares or the evil spirits that cause such dreams. Sometimes they do this unbidden, but other legends require a nightmare sufferer to awaken and call upon a baku to eat his dreams. According to some beliefs, baku can change eaten dreams to good luck. Other tales make the baku more troublesome, eating all dreams and thus depriving sleepers of their beneficial effects, or simply awakening sleepers and depriving them of sleep in general.

Retrieved from "https://ficspecies.fandom.com/wiki/Baku?oldid=5939"
Community content is available under CC-BY-SA unless otherwise noted.