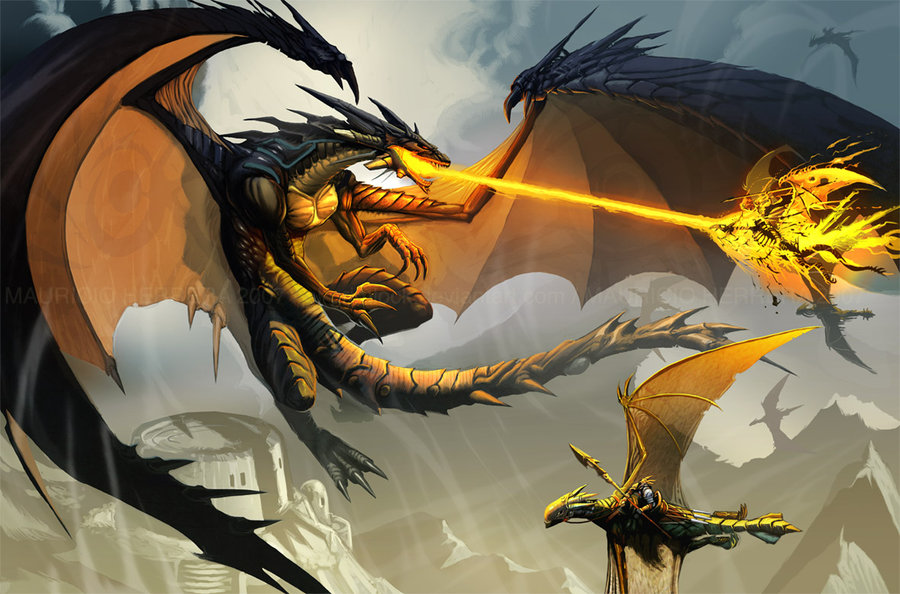 Dragons are large reptilian creatures that appear in various mythologies and on a multitude of worlds.

They are usually depicted as powerful beings, wise as they are fierce. In folklore, dragons appear (in some form) worldwide, and are associated with supernatural knowledge and longevity.

In the book An Instinct for Dragons, anthropologist David E. Jones suggests a hypothesis that humans just like monkeys have inherited instinctive reactions to snakes, large cats and birds of prey. Dragons have features that are combinations of these three. An instinctive fear for these three would explain why dragons with similar features occur in stories from independent cultures on all continents. Other authors have suggested that especially under the influence of drugs or in dreams, this instinct may give rise to fantasies about dragons, snakes, spiders, etc., which would explain why these symbols are popular in drug culture. The traditional mainstream explanation to the folklore dragons does however not rely on human instinct, but on the assumption that fossil remains of dinosaurs gave rise to similar speculations all over the world.

Physical characteristics of dragons vary but several consistencies are usually present. The beasts typically possess reptilian features suggestive of a lizard or snake. Fangs, twin horns and (usually four) clawed limbs. The number of legs is often presented as a unique feature distinguishing the dragon from it two-legged cousin, the wyvern. Most dragons will be covered in scales, although there are some with fur, leathery skin or even feathers. Almost all species of dragon have a long, serpentine tail.

Key physical differences in dragon species show a clear split between the Eastern and Western varieties of dragon. While European dragons generally possess bat-like wings giving them the capability of flight, Chinese-style dragons are usually wingless, using a more magical means of flying. Generally, eastern dragons tend to be more snake-like in nature, albeit with front and rear legs. Dragon coloring ranges the entire spectrum of colours but red, green, black and gold appear to be the most common.

A trait universal to almost all dragons is their magical nature, particularly the ability to breathe fire.

The behavior of dragons can vary widely. Some are benevolent and wise, while some are viscious monsters that attack on sight. Dragons typically have a lair, sometimes located atop high mountains or hidden in deep caverns and caves. Some have been depicted hoarding precious jewels, metals, and other forms of treasure.

Dragons are often held to have major spiritual significance in various religions and cultures around the world. In many Asian cultures dragons were, and in some cultures still are, revered as representative of the primal forces of nature, religion and the universe. They are associated with wisdom—often said to be wiser than humans—and longevity. They are commonly said to possess some form of magic or other supernatural power, and are often associated with wells, rain, and rivers. In some cultures, they are also said to be capable ofhuman speech. In some traditions dragons are said to have taught humans to talk.

Dragons appear on hundreds of worlds, in thousands of legends. Some of these are described below.

Dragons are mighty reptilian creatures, which the first Dark Lord Morgoth created during the First Age of Arda, also known as Middle-earth. They are immortal, powerful, cunning, and may possibly be spirits known as Maiar. The Withered Heath was a known breeding ground for Dragons. The first Dragon ever seen in Middle-earth was Glaurung, who is known as the Father of Dragons. They are sometimes referred to as great wyrms or drakes. They lived through-out the first, second, and third ages of Middle-earth and may have lived longer.

In addition to being long-lived, powerful, and cunning, dragons also possess subtle intelligence, great physical strength, and a love of treasure (especially gold). They also have a hypnotic power called "dragon-spell"; weaker-willed beings can be put into a trance or bent to a dragon's will when the beast spoke. In addition, dragon-spell seems to have the ability to plant mistrust in a listener's mind. This power seems to extend to a dragon's treasure hoard, causing it to excite feelings of greed and animosity among others. Dragons also have an acute sense of smell, and can sleep with half an eye open keeping on eye out for intruders if they are suspicious. They are well known for sleeping on piles of treasure.

Dragons apparently have a love of riddles and puzzling talk, spending long hours trying to decipher it. Therefore, speaking in ambiguous riddles is the best way to converse with a dragon, as it is quite unwise to either tell the full truth or to directly refuse them.

They have strong scales, which can resist most weapons, though young dragons have to grow into their armoury. Mithril is said to be as strong as dragon scales, though lighter in weight. The underbelly of the dragon is soft, slimy, and unarmored; however, Smaug had lain so long on the heap of treasure in the deep of the Lonely Mountain that gems and coins had stuck into the slime, so that he was "armored above and below with iron scales and hard gems." The Dwarves appear to have some skill at fighting dragons, as seen when they held off Glaurung for a time in the Nirnaeth Arnoediad. This may have something to do with the age-long fight between Dwarves and Dragons.

A great stench went before Glaurung, and his blood contained some sort of venom, though it is not known if all dragons had these two traits. The Dwarves commented on the reek of Smaug that filled the Lonely Mountain's halls after the dragon's long stay there.

Dragons are a lost species that are responsible for the dinosaurs' extinction by burning them all to ash. The speculation is that dragons instinctually hibernate after destroying most of the earth's living creatures, waiting until theEarth repopulates. Females carry unfertilized eggs and their metabolism is so high they live only a few months; there is only one male, who is capable of hibernating for several thousand years (at least). If it is killed the species will be unable to reproduce. There are millions of females to the male. Females will lay their eggs and the male will fly over, fertilizing them as he goes. They are also capable of breathing fire. To do this they spray two chemicals from glands in their mouths; when these two chemicals meet, they react with one another and violently combust. It is said that they feed on ash.
Retrieved from "https://ficspecies.fandom.com/wiki/Dragon?oldid=5904"
Community content is available under CC-BY-SA unless otherwise noted.