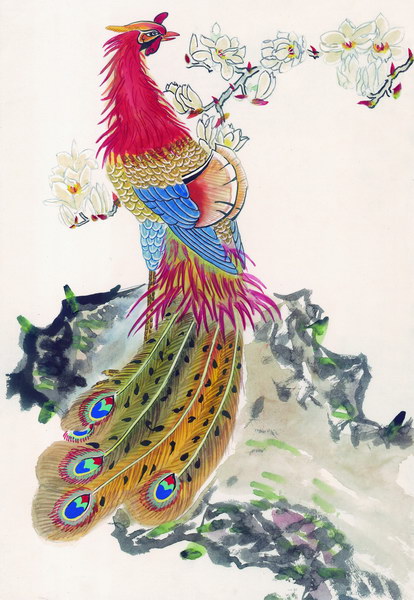 Fenghuang (Chinese: 鳳凰; fènghuáng) are phoenix-like birds of East Asia that reign over all other birds.

Traditionally, the males are called Feng and the females Huang. In modern times, however, such a distinction of gender is often no longer made and the Feng and Huang are blurred into a single feminine entity.

The Fenghuang is said to be made up of the beak of a rooster, the face of a swallow, the forehead of a fowl, the neck of a snake, the breast of a goose, the back of a tortoise, the hindquarters of a stag and the tail of a fish. Today, however, it is often described as a composite of many birds including the head of a golden pheasant, the body of a mandarin duck, the tail of a peacock, the legs of a crane, the mouth of a parrot, and the wings of a swallow.

Its body symbolizes the six celestial bodies. The head is the sky, the eyes are the sun, the back is the moon, the wings are the wind, the feet are the earth, and the tail is the planets. Its feathers contain the five fundamental colors: black, white, red, blue and yellow. It is also sometimes depicted as having three legs.

A common depiction was of it attacking snakes with its talons and its wings spread. With it's big wings i t can create wind. this creature can also fly very fast. It is believed that Fenghuang only appear in areas or places that are blessed with utmost peace and prosperity or happiness. In some traditions it appears in good times but hides during times of trouble, while in other traditions it appeared only to mark the beginning of a new era.

Retrieved from "https://ficspecies.fandom.com/wiki/Fenghuang?oldid=10069"
Community content is available under CC-BY-SA unless otherwise noted.