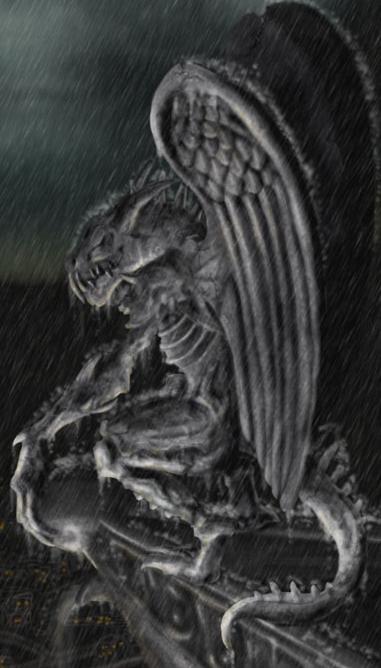 Gargoyles are found on an architectural structure, originally designed to serve as a spout to throw rainwater clear of a building. They later became strictly ornamental and assumed many forms. Today the legends surrounding the actual reasons behind the elaborate figures are just as varied as the individual creatures themselves.

The word gargoyle itself comes from the Old French word Gargouille,meaning throat or gullet. This word is used to describe the sound that is produced when water passes through the throat and mixes with air and is also the origin of the word gargle. This word was originally used in reference to the drains atop medieval cathedrals which were later carved into the form of beasts or animals.

The priest Romanus struck a deal with the villagers of Rouen, promising to take care of the dragon called La Gargouille if they agreed to be baptized Boden Gargoyle Sentineland to build a church. The villagers agreed, and the priest headed to the River Seine, where he subdued the dragon in its cave and led it back to the town to be burned at the stake. The dragon’s head and neck, however, were well-tempered from his fire-breathing habits, and so would not burn. The remnants were instead mounted on the town wall.

Gargoyles are described as any sculpted creature inhabiting the upper levels of buildings, be they cathedrals or not. They are usually carved in the form of a grotesque face, figure or frightening creature. Possible characteristics include: ugly human faces, animal features, forms borrowed from mythical and imaginary creatures, and chimeric combinations of the above. It has been said that no two gargoyles are alike.

It is said that gargoyles are protective spirits that frighten away evil. Gargoyles are also said to come alive at night, flying around their hometown or city.

Gargoyles are a distinct race, not just as a structural ornament. The typical gargoyle is a (generally) winged humanoid race with demonic features (generally horns, a tail, talons, and may or may not have a beak). Gargoyles can generally use their wings to fly or glide, and are often depicted as having a rocky hide, or being capable of turning into stone in one way or another.

The dreaded gargoyles of Northrend are voracious flying creatures who revel in slaughter and mayhem. Brought from the frozen north by the armies of the Lich King, these strange, wiry flyers have rough, crystalline hides which protect them from all manner of attacks. In times of great peril, gargoyles can land and condense their hides into a stone-like surface. Though they are unable to attack in this state, they can take time to regenerate their wounds and replenish their energies. Gargoyles are not particualarly intelligent and are not interested in strategies or tactics. These vicious creatures only enjoy chaos and slaughter and revel in sprays of blood and torn flesh. Gargoyles sleep in their Stoneform.

Gargoyles are grotesque, winged monstrous humanoids, with a horned head and a stony hide. It is a little known fact that gargoyles aren't simply statue-like, stone-skinned beasts that hunt other living beings. Some gargoyles are extremely wise creatures, who have seen much of the world around them, and experienced some of the greatest hardships that a being can survive. Still other gargoyles are actually quite intelligent, unlike others of their kind, and capable of picking apart a situation with ease. There are even gargoyles that have baked deep within the depth of volcanoes, for very long time, to the point that their body changes; they resemble diamond to the eyes of others. They can perch indefinitely without moving, and use this disguise to surprise their foes. They require no food, water, or air, but often eat their fallen foes out of fondness for inflicting pain.

Gargoyles are a species of hideous humanoid creatures that resemble the well-known, grotesque, demon-like statues used in medieval architecture. They are able to wield magic and cast spells, usually preferring to warp the minds of their foes with illusion spells.
Retrieved from "https://ficspecies.fandom.com/wiki/Gargoyle?oldid=7180"
Community content is available under CC-BY-SA unless otherwise noted.