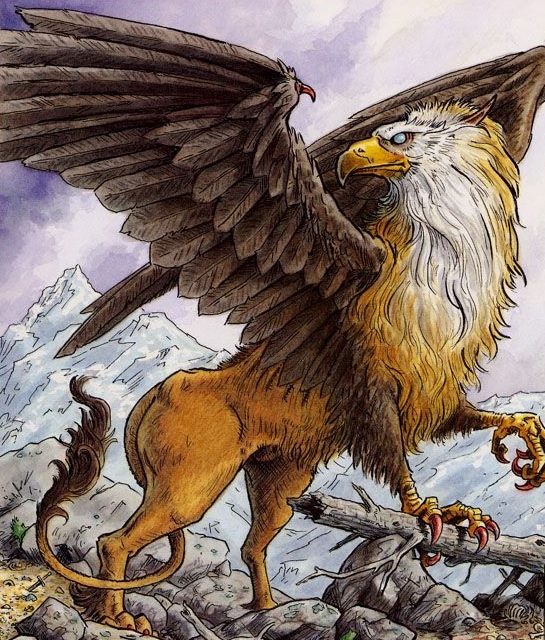 A Griffin, also spelled Gryphon, is a chimeric creature which has the body of a lion and the forelegs, head and wings of a large eagle.

Found in scattered locations throughout Europe, Asia and Northern Africa, members of this species are typically regarded as fierce but noble creatures. The fact that they combine aspects from the "king of the beasts" and the "king of the birds" gives them an aura of respect and elegance. Like Dragons, they are often guardians of treasures.

Griffins are a chimeric species which combines aspects of both birds and mammals, and are typically represented with six limbs: four legs and two wings. However, male Griffins are traditionally regarded as wingless, and are sometimes known as Keythongs or Alces. Curiously, there doesn't seem to be a specific name for the females. In some cases, male Griffins have been depicted with horns on their heads and/or spikes on their shoulders.

The claws and feathers of a Griffin possess magical and medicinal properties. Their feathers can cure blindness and illnesses; and a cup made from the hollowed claw of a Griffin will change color when filled with a poisonous drink, thus being very useful for the detection of potential toxins.

Griffins are oviparous and lay their eggs in nest which often contain gold nuggets. The species, in fact, seems to have a penchant for collecting gold and other preciousness, and in some cases have been known to horde vast treasures, rivaling those collected by some Dragons.

Griffins are monogamous and mate for life. When one of the pair dies, its spouse will rather remain alone than find another mate. They are intelligent and wise creatures, sometimes even capable of speech.

Despite being rare, this species has a very widespread range. They have been reported from Egypt, the Middle-East, Southern Europe, India and Central Asia. They can usually be found in distant, hard-to-access locations, such as deserts and mountains (alluding to the habitats of the lion and the eagle respectively). Many of them are known to nest in the Caucasus Mountains.

The Opinicus is a specific type of Griffin which has the forelegs of a lion, rather than an eagle; and the tail of a camel. Otherwise, they closely resemble the common Griffin variety.

Members of this species have a blood enmity with horses that dates back to millennia. The Hippogriff, a hybrid born from the unlikely union between a mare and a Griffin, is an extraordinarily rare creature for this reason, and has been regarded as a symbol of both the impossible and of forbidden love.

Retrieved from "https://ficspecies.fandom.com/wiki/Griffin?oldid=9985"
Community content is available under CC-BY-SA unless otherwise noted.