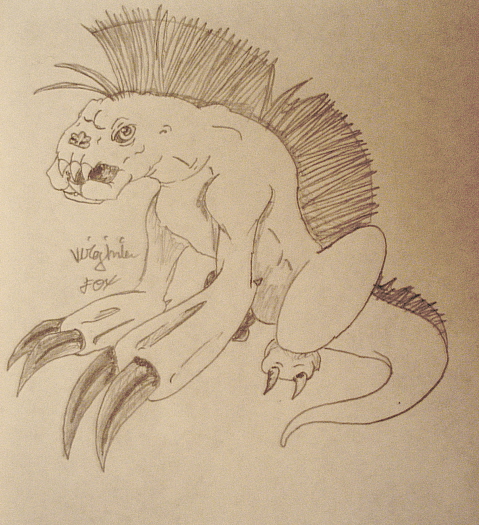 Its body is composed of either lightning or fire and may be in the shape of a cat, tanuki, monkey, or weasel. The form of a white and blue wolf (or even a wolf wrapped in lightning) is also common. It may also fly about as a ball of lightning or fire (in fact, the creature may be an attempt to explain the phenomenon of ball lightning). Its cry sounds like thunder.

Raiju are the companions of Raijin, the Shinto god of lightning. While the beasts are generally calm and harmless, during thunderstorms, they become agitated and leaps about in trees, fields, and even buildings (trees that have been struck by lightning are said to have been scratched by a raiju's claws).

Another of the raiju's peculiar behaviors is sleeping in human navels. This prompts Raiden to shoot lightning arrows at it to wake the creature up, and thus harms the person in whose belly the demon is resting. Superstitious people therefore often sleep on their stomachs during bad weather, but other legends say that they will only hide in the navels of people who sleep outdoors.

Retrieved from "https://ficspecies.fandom.com/wiki/Raiju?oldid=5987"
Community content is available under CC-BY-SA unless otherwise noted.