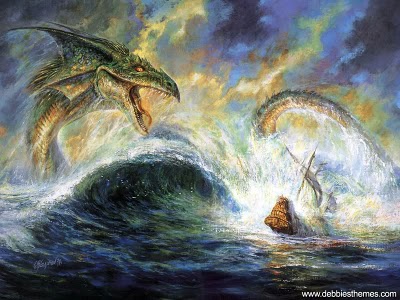 A sea serpent or sea dragon is a large sea-dwelling monster with distinctly serpentine characteristics.

Sightings of this serpent-like beast have been reported for hundreds of years and continue to this day. Many old maps show images of sea serpents attacking ships attempting to sail across the ocean. The creatures are said to wrap their bodies around ships and drag them down to watery depths, dooming all sailors aboard.

Sea serpents have a longer and grander history than just about any other cryptid. They were studied and debated about for hundreds of years before the formal discipline of cryptozoology arose. During this time period, dozens of other mythical sea creatures were proven real, and at many points in history it seemed as if official discovery of the sea serpent was just around the corner. However, no official discovery has ever happened; today the sea serpent is a subject of scientific ridicule.

Sightings of sea serpents are quite numerous, occur in all the world's oceans and come from every era of history, including a substantial number of modern sightings. Because of these facts, and because the ocean is by far the easiest place for a large animal to live undetected, many researchers still hold out hope that someday the sea serpent may be discovered.

Sea serpent descriptions have a number of things in common, but also enough variety to suggest more than one species. Sea serpents come in a variety of colors, including black, brown, gray and green, and have adult lengths ranging from twenty feet to hundreds of feet. Most of them are reported to move in an undulating up-and-down motion, with a series of humps visible above the water at times. They generally have a split tail, like a whale, and may have one, two or more pairs of paddle-legs along their lengths. They may have armored segments like a millipede, large plates or scales, or a smooth rubbery skin. Most often, they have smooth skin suggestive of a mammal.

Sometimes sea serpents have a mane of hair or hair-like fins running in a row along the back. The head is generally described as horse-shaped, with huge cat-like or eagle-like eyes. On sea serpents that don't follow that body plan, the head and neck instead resemble an elephant's trunk, with tiny eyes and a small mouth near the "tip" of the "trunk." Some sea serpents sport whiskers, but it is not always clear whether witnesses mean the same kind of whiskers that cats, dogs and seals have, or whether they mean fleshy "whiskers" of the sort that are found on catfish.

The creatures described in these reports tend to look fairly serpentine, as far as their overall body shape goes, although in some cases it is only the head end and tail end that look serpentine, with a roundish body between the two ends. At first, this generally serpentine shape meant that sea serpents were universally thought to be huge ocean-going snakes or sea dragons. Witnesses would confidently label them as snakes even when some features inconsistent with this conclusion were also noted, such as a mane of hair (typical of mammals only) or an up-and-down motion (all known snakes swim with a side-to-side motion). Hans Egede, the national saint of Greenland, gives an 18th century descriptions of a sea serpent. On 6 July 1734 his ship sailed past the coast of Greenland when suddenly those on board

"saw a most terrible creature, resembling nothing they saw before. The monster lifted its head so high that it seemed to be higher than the crow's nest on the mainmast. The head was small and the body short and wrinkled. The unknown creature was using giant fins which propelled it through the water. Later the sailors saw its tail as well. The monster was longer than our whole ship", wrote Egede. (Mareš, 1997)

A particularly famous sea serpent sighting was made by the men and officers of HMS Daedalus in August, 1848 during a voyage to Saint Helena in the South Atlantic; the creature they saw, some 60 feet (18 m) long, held a peculiar maned head above the water. The sighting caused quite a stir in the London papers, and Sir Richard Owen, the famous English biologist, proclaimed the beast an elephant seal. Other explanations for the sighting proposed that it was actually an upside-down canoe, or a posing giant squid.

Another sighting took place in 1905 off the coast of Brazil. The crew of the Valhalla and two naturalists, Michael J. Nicoll and E. G. B. Meade-Waldo, saw a long-necked, turtle headed creature, with a large dorsal fin. Based on its dorsal fin and the shape of its head, some have suggested that the animal was some sort of marine mammal. A skeptical suggestion is that the sighting was of a posing giant squid, but this is hard to accept given that squids do not swim with their fins or arms protruding from the water.

On April 25, 1977, the Japanese trawler Zuiyo Maru, sailing east of Christchurch, New Zealand, caught a strange, unknown creature in the trawl. Photographs and tissue specimens were taken. While initially identified as a prehistoric plesiosaur, analysis later indicated that the body was the carcass of a basking shark.

Mostly docile, there are some reports of aggressive attacks by the creatures. In 1808 an Australian was attacked by a sea monster that, "had climbed across bow and bitten or chewed, one of the hands." It's eyes were the size of a "warrior's shield." The attack continued until the captain went below and returned with guns. He fired them into the animal's eyes and the monster returned to the ocean.

Toward the end of World War I the German submarine UB-85 was caught on the surface, during the day, and sunk by a British patrol boat. The crew abandoned the sub and was picked up by the British. The U-boat commander, Captain Krech was questioned about why he had been cruising on the surface and he told this tale:

"Every man on watch began firing a sidearm at the beast," Krech continued. The animal had hold of the forward gun mount and would not let go.

The battle continued until the animal dropped back into the sea. In the struggle, though, the forward deck plating had been damaged and the sub could no longer submerge. "That is why you were able to catch us on the surface," the Captain concluded.

Sea serpents are found in many different environments and worlds.

Sea serpents are large serpents living in the seas of Azeroth. They may be worshiped by some murlocs. They don't usually migrate as far north as Durotar, as a general rule.

The sea serpent is an aquatic creature found in several oceans around the world including the Atlantic, Pacific, and Mediterrainean Sea. Reaching over a hundred feet long with a horse-like head and snake-like body, the sea serpent is a fearsome looking creature. Despite this, no Sea Serpent has ever been known to hurt a human, despite Muggle stories of encounters with the beasts. It rises in humps out of the water as it swims.

The sea serpent is a dragon, perfectly adapted to water. It attacks ships on sea with its fire breath and magic abilities. Intelligent, they stay at a distance for their own safety. Warriors are helpless against this kind of attack, and have to trust the ship's cannons to deal with the foe. As one might expect, sea serpents are only encountered at sea, but are capable of attacking anyone who ventures too closely to the shoreline.
Retrieved from "https://ficspecies.fandom.com/wiki/Sea_Serpent?oldid=5891"
Community content is available under CC-BY-SA unless otherwise noted.